Leander, TX. August 13, 2010
The new LaRue VFZ (Vectored Force Zero) mount clamp is now available as an option to most LaRue mounts that have a QD speed lever. VFZ is a new theory in the concept of clamping accessories to MIL-STD-1913 rails. Instead of using a horizontal cross-bolt, the VFZ uses a vertical bolt, that draws up a clamping foot against the lower angle of the rail, locking it similarly to a fully-closed LaRue lever. Once installed on the firearm, index marks allow the user to remove the mount, then reattach to the same tension, providing unprecedented return to zero for a non-QD-levered mount. The unique vertical alignment of the clamp allows components that are structurally ber than traditional cross-bolt designs.

The new VFZ will be an option to all LaRue mounts that feature a locking lever, and is a cost-effective solution for those who don’t need ultra-quick-disconnect capability. The VFZ takes less than a minute to install, using a supplied 3/8” wrench.

About LaRue Tactical
Located in Leander, Texas, "LaRue" is synonymous world-wide with auto-resetting sniper targets and quick-detachable mounting systems for every weapon-mounted optic, laser and night-vision device used by our Nation’s Warfighters. 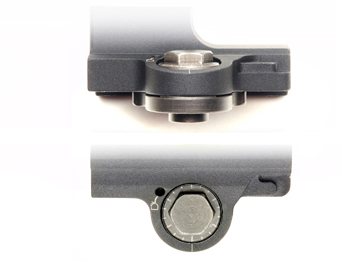