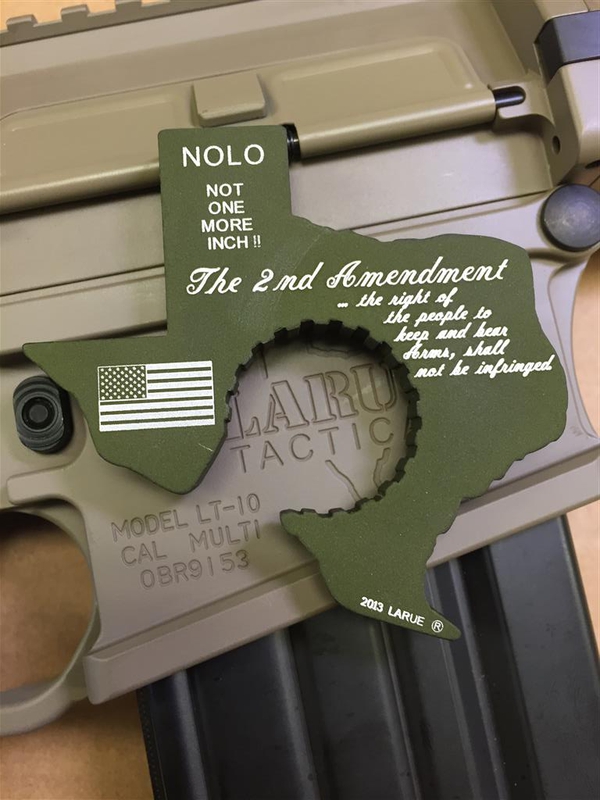 The One Thousandth Challenge.

I made up 1,000 of our Texas custom-engraved Dillos to raise $50,000 for Stephen Stamboulieh (aka “Nolo Contendre” on ar15.com) to defray the 2nd Amendment legal battles he’s in ... for plane tickets, hotel rooms, UBER fees, etc.

I've watched Stephen carrying all of our 2A waters for years and it's time to pass the plate and throw a fifty in.

100% of your $50 bucks goes to Stephen's law firm. You know all your money will land straight into the fight. LaRue's contribution is making the custom dillos, anodizing them, engraving them, packaging them and eating the shipping.

Since you’re reading this … you know I rarely step off the plate to do fundraisers, so when I do, I make it worth your while.

From all of us at here at LaRue Tactical ...

Not One More Inch!

P.S. For those of you that can handle a wall-of-text, here's all about
Nolo Contendre aka Stephen Stamboulieh

I asked Stephen to jot down some accomplishments when he got a moment.

"Graduated law school in 2007 and quickly started working behind the scenes to promote the 2A.


2011 - Mississippi legislature passed a law (HB 506) allowing individuals to take a firearms handling/safety course, allowing them to carry virtually everywhere. After the Mississippi Department of Public Safety got it's hands on the bill, they tried to promulgate regulations that mandated only MS Law Enforcement Training Academy could teach a 16 hour class.

I met with the LT. Governor and asked for a meeting with DPS and the Governor’s attorneys. Met during a roundtable and worked out the issues with them agreeing to have instructors from “nationally recognized organizations” teach 8 hour classes instead of police training and 16 hours. It tremendously broadened who could teach, shortening the length of class time required.

2013 - Worked on legislation to make MS an open carry state. After it was unanimously approved, some Democrats in the legislature filed a lawsuit to stop the law. I filed an Amicus Brief on behalf of 80 legislators supporting the law which defined concealed for the first time in Mississippi, overturning decades of Mississippi Supreme Court precedent saying that essentially you could never have an openly carried firearm because a firearm that was dangling by a string around your neck would be considered a concealed firearm because the string covered a portion of the trigger guard. Seriously. https://courts.ms.gov/newsite2/appellatecourts/docket/sendPDF.php?f=dc00001_live.SCT.13.M.1220.885.0.pdf&c=78495&a=N&s=2

2014 - Filed two lawsuits aimed ruling that the National Firearms Act impermissibly infringed on the 2A. These cases were ultimately heard by the 3rd and 5th Circuit Courts of Appeal and both courts found that the 2A does not apply to machineguns. (Hollis v. Lynch and Watson v. Lynch)

In 2015/16 - Assisted in drafting legislation in MS that would further restrict localities from banning firearms and gave individuals the right to contest illegal restrictions in court and made all findings a matter of public record.

2016 - I began to file cases in the District Court of DC to assist people with their NICS denials. To date, I’ve filed 5 of those and every one has resulted in my clients receiving a proceed on their transactions and their records corrected for the erroneous denial. http://www.sdslaw.us/single-post/2017/08/21/NICS-Processes-Appeal-in-54-Days (see also http://www.sdslaw.us/single-post/2017/06/18/No-fees-for-you-Court-denies-attorneys-fees-in-NICS-appeal-case denying fees in that case)

Late 2016 - Rewrote some federal legislation to “fix” the NICS denial issues. To date, that legislation has not been introduced.

2016 - my co-counsel and I filed a case in New Jersey against its “justifiable need” standard. This case was dismissed after the lead plaintiff (Almeida) was granted a permit and the other plaintiff was found to not have standing.

2016 - my co-counsel and I filed many stun gun cases seeking to overturn stun guns bans in Annapolis, MD; New Jersey; New Orleans, LA; and New York. We were successful in overturning all of the bans and are currently litigating a case against New York. I’ve also been successful in overturning the ban on stun guns in Philadelphia, Tacoma WA, and Westminster, MD. http://www.sdslaw.us/single-post/2017/10/24/New-Jersey-stun-gun-ban-is-officially-dead

2017 - Ran for the NRA Board of Directors after being nominated by petition. Ultimately I was not elected to serve on the board.

Also filed several FOIA cases against ATF and the OIG regarding the National Firearms Registration and Transfer Record (we prevailed against OIG in that case and were delivered documents that demonstrate how bad the NFRTR really is) http://www.sdslaw.us/single-post/2017/03/22/Hardy-v-ATFOIG---Opinion-and-Order-filed-today

Also sued the Department of State over Fast & Furious and represent Kent Terry, the brother of slain border patrol agent Brian Terry. We are slowly receiving documents in that case http://www.sdslaw.us/single-post/2018/03/06/Department-of-State-issues-third-production-in-Terry-v-DoS-FOIA-on-Fast-Furious

Currently, I am still litigating the New York stun gun case and a case with Alan Beck in the 9th Circuit out of Hawaii in which we had oral argument on February 12, 2018. I have two FOIA cases ongoing: One against Department of State (fast & furious) and one against the Air Force for the church shooter’s court martial records. These are both being litigated in DC. http://www.sdslaw.us/single-post/2018/01/29/Today-we-filed-a-Freedom-of-Information-Act-lawsuit-against