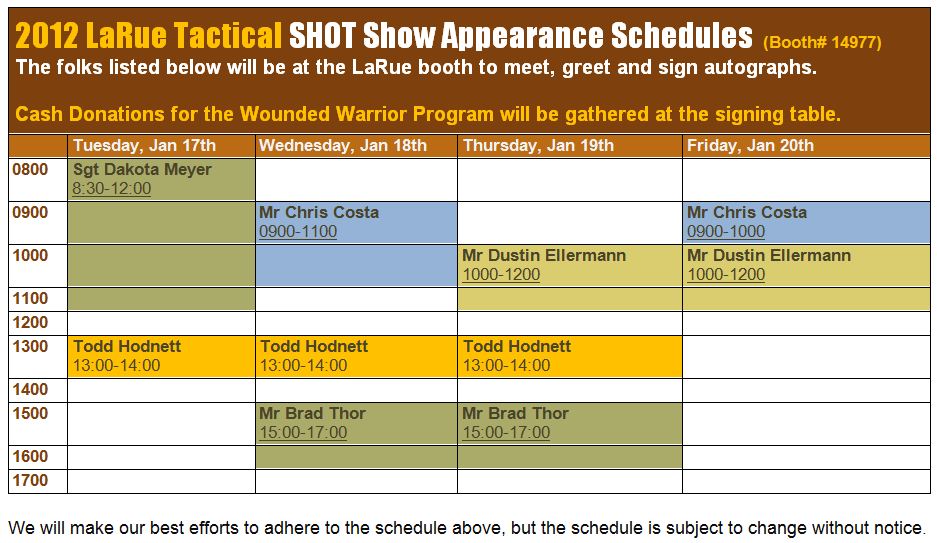 It is our honor to have our good friend Dakota Meyer at our booth this year. We’ll have a limited edition poster of Sgt. Meyer with his personal LaRue OBR for signing. (donation to WWP required)

Sgt. Meyer is a United States Marine Corps veteran and recipient of the Medal of Honor for his actions during the Battle of Ganjgal on September 8, 2009, part of Operation Enduring Freedom in Kunar province, Afghanistan. He is the third living recipient of the Medal of Honor since the Vietnam War, and the first living United States Marine in 38 years to be so honored.

Sgt. Meyer was born and raised in Columbia, Kentucky, enlisted in the United States Marine Corps in 2006, and completed his basic training at Parris Island Recruit Training Depot later that year.
A school-trained sniper and highly skilled Marine infantryman, Sgt. Meyer deployed twice to combat duty. In 2007, he deployed to Iraq for Operation Iraqi Freedom, and during 2009-10, he deployed to Afghanistan for Operation Enduring Freedom.

Sgt. Meyer was serving as a turret gunner and driver when he deployed to combat duty in Afghanistan. His unit assignment at the time of his heroic acts was with Marine Embedded Training Team 2-8, Regional Corps Advisory Command 3-7 operating in Kunar Province, Afghanistan.

Sgt. Dakota Meyer completed his active duty in 2010 and now serves in the Individual Ready Reserve of the U.S. Marine Corps Reserve. Since returning to civilian life he continues to work to tell the stories of the Marines with whom he served. He also has completed undergraduate college coursework and currently is employed by McDan, Inc. a Kentucky construction company.

It’s no secret that Brad Thor is a fan of LaRue Tactical, and that we’re a fan of his. We feel his work is required reading by all true Americans. We will have a variety of Brad Thor novels available for signing. (donation to WWP required)

Brad Thor is the #1 New York Times bestselling author of Full Black, Foreign Influence (one of Suspense Magazine’s best political thrillers of 2010), The Apostle, The Last Patriot (nominated best thriller of the year by the International Thriller Writers Association and banned in Saudi Arabia), The First Commandment, Takedown, Blowback (recognized as one of the “Top 100 Killer Thrillers of All Time” by NPR), State of the Union, Path of the Assassin, The Lions of Lucerne, and his New York Times bestselling spin-off series The Athena Project.

Brad has been called “the master of thrillers,” “as current as tomorrow’s headlines,” and “quite possibly the next coming of Robert Ludlum.” His internationally bestselling novels have been published in Australia, Brazil, Bulgaria, Canada, China, the Czech Republic, Denmark, France, Germany, Hungary, India,Italy, Japan, the Netherlands, New Zealand, Poland, Portugal, Romania, Serbia, Spain, the United Kingdom, the United States, Thailand, Turkey, and Vietnam.

Brad is a member of GBTV, and has appeared on FOX News Channel, CNN, CNN Headline News, MSNBC, ABC, CBS, NBC, and PBS programs to discuss terrorism, as well as how closely his novels of international intrigue parallel the real threats facing the world today. In 2010, Brad was featured by the Speed Channel in the “Executive Protection” episode of their “Dangerous Drives” series.

Brad has served as a member of the Department of Homeland Security’s Analytic Red Cell Unit, and is a fellow of the Alexandrian Defense Group. He has lectured to law enforcement organizations on over-the-horizon/future threats and has been a keynote speaker for the National Tactical Officers Association annual conference, and the Ronald Reagan 100 celebration. A strong supporter of The Heritage Foundation, Brad has spoken at their national headquarters on the need for robust missile defense. He also sits on The International Free Press Society’s Board of Advisors, and has served as a judge for the Sam Adams Alliance Annual Awards.

In 2008, Brad shadowed a Black Ops team in Afghanistan to research his thriller, The Apostle.

Mr. Costa will be at the Larue Tactical booth to meet, greet and talk about his new company “Costa Ludas”, and how LaRue Tactical is supporting his new effort. We’ll have a limited edition poster of Mr. Costa available for signing. (donation to WWP required)

Prior to this, Costa spent 12 years with the United States Coast Guard, conducting counter-drug operations and special missions in Europe, the Middle East, and South America with such units as; the International Training Division (ITD), Maritime Law Enforcement Academy, Plank-Owner of Port Security Unit 302 and the Taclet Law Enforcement Team North.

“Dustin may be the best shooter we ever had.” Those words spoken by “Top Shot” host Colby Donaldson echoed the sentiments of scores of viewers as they watched Dustin Ellermann shoot his way to the grand prize of season 3 of History’s top-rated program. We’ll have a limited edition poster of featuring Dustin with his personal LaRue for signing. (donation to WWP required)

And while his stunning performance at the final challenge stood the shooting world on its ear, it was his character that endeared so many to this 28-year-old from Zavalla, TX. He brought no drama; only skill and passion along with a calm, cool demeanor into shooting challenges that rattled the most seasoned competitors.

Before he was the “Top Shot” champion, he was (and remains) the director of Camp His Way a summer Christian kids camp and year round retreat facility. He and his wife are also foster parents and have 3 children of their own.

And his easygoing attitude on shooting is much more impressive when you learn he was 99 percent self-taught.

“Shooting is fun to me and I thank the Lord for the opportunity to be on “Top Shot” and to now be able to share my passion for shooting through clinics, range days and other appearances. Putting God and family first, I look forward to seeing where this journey leads.” ~ Dustin

A Texas native, Todd has been a long-time friend of LaRue Tactical and can be seen in Magpul Dynamics’ new DVD, “Art of the Precision Rifle”.

Todd is considered one of the most respected and sought after instructors in the entire world. With over 20 years experience, Todd has traveled the world training soldiers in the art of precision shooting. His determination, knowledge and vision has provided guidance for products to improve the accuracy and function of the sniper. In addition to having a hand in the development of several HORUS reticles, Todd recently invented the Accuracy 1st “Whiz Wheel” ballistic solution device, a battery-free alternative to a ballistic computer.